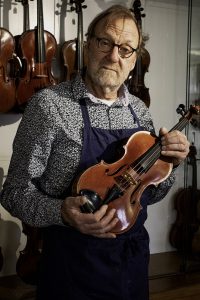 Having been gripped by the art of violin building at an early age, Serge attends the famous Musical Instrument Making School in Mittenwald (Germany) in 1965, after finishing his secondary school. Four years later, he graduates after taking the journeyman exam.

In the years that follow, he alternately works at his father, at Rene Morizot in Mirecourt (France) in 1971 and at Bernard Millant in Paris in 1972. Working at this final master’s studio, his interest in the craftsmanship and expertise of bows is roused.

From 1972 onwards, Serge works together with his father, until the latter is forced to retire in 1979. From this point onward, Serge and his wife Jacqueline have run the company.

Serge Stam is a member of the Dutch Group of Violin Makers, as well as the International Alliance of Violin and Bow Makers. His vast knowledge in both the fields of newly-built as antique instruments makes for a rare combination in his field.

He’s a sworn-in appraiser and was invited to judge at the most prestigious competitions in the field of violin building, for example the Triennale A.Stradivari in Cremona (1997), Concours Etienne Vatelot in Paris (2004) and the Mittenwald violin building competition (2005 as well as 2014).

Jacqueline Stam has been taking care of the daily goins-on at the company since 1979. She’s a trained music librarian and has amassed a vast amount of know-how pertaining to our company as well as its clientele.

Otto Stam is the company’s founder. He grew up in KAmpen, was trained to play the cello in Zwolle for several years and attended the Antwerp art academy.

In 1936, Otto Stam established a violin building workshop at the Lange Smeestraat in Utrecht. During the Second World War, he relocates to the Zadelstraat. The workshop located in the attic is still fondly remembered by some.

During the company’s first few years, Otto still manages to find plenty of time for painting as well as violin building, but as the years go by, the company’s focus shifts to the restauration of as well as the trade in instruments. In spite of this, the passion for newly-built instruments remains, resulting in a great many beautiful instruments crafted.

A cello entered in the 1956 Pegli (Italy) competition is awarded the gold medal. In Ascoli Piceno (Italy), a viola is awarded a silver medal in 1959.

Otto Stam, now enjoying the full-time support of his wife, relocates the company to the Lucasbolwerk in 1963. He’ll remain active until 1979, with his son helping out  from 1972 onwards. His health eventually no longer allows for him to continue his violin building activities and he returns to his other big passion: painting.
He passes away in 1983.